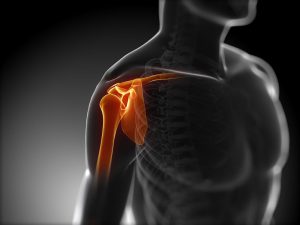 I read a Frederic Delavier’s book « Strength Training Anatomy » and there is good stuff.

It’s one of rare exercice to do when you have a shoulders injury, subacromial bursitis

Do dumbbell bench press with elbows along the body work, the anterior bundles of the deltoid and, a little bit, its middle portion to avoid an excessive friction at the front of the shoulders.

Do it regularly, it allows you to keep shoulders voluminious and tonic in spite of a local pathology. And it can use as a rehabilitation movement after a tear of pectoralis major muscle. Keep elbows along the body reduces stretching of pectoral major muscle limiting the risk of tearing of the injured area.

Lying on a bench, your chest out and your back slightly arched. Your elbows flexed and along your body with a dumbbell in each hand :

Influence of bone morphology on back press

It’s important to take into account the individual differences in morphology when you’re training shoulders with back press.

Arms lenght and especially forearms, plays a fundamental role in the execution of the exercice.

This excessive elbow descent has the effect of streching the deltoid strongly, placing it in an unfavorable position that doesn’t allow the muscle to recruit the maximum amount of fiber to start the push powerfully.

Clavicles width has a influence on the possibility of correctly lowering the barbell behind the neck.

Short clavicles invariably bring the two shoulder blades towards the vertebral axis. It follows that during the back press, when the two shoulder blades tilt towards the inside of the back, their displacement is substantially reduced by the compression of the trapezius and rhomboid muscle which fill the middle of the back, which limits at the same time the possibility of descendent correctly elbows to well feel deltoids work.

In addition, it’s important to note that more you have big muscles in the center of the back, the less the shoulder blades will be able to get closer and the lower the barbell behind the neck will be limited.

Note : Indivuduals with long forearms and narrow clavicles should have an interest in avoiding the back press to properly work deltoids. 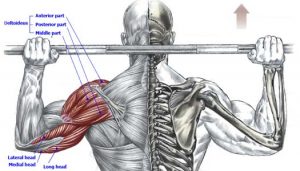 Too much space between the glenohumeral joint and the acromio caraoidal osteo ligamentary vault can lead to excessive friction when the humerus is raised in external rotation. With time, risk to damage, even tear, the supra-spinous tendon. With back press, it’s therefore important with the slightest sensation of discomfort in shoulders, accompanied by pain, to change movement in order to avoid a degenerative rotator cuff’s tendinitis.

A too small space between the gleohumeral joint and the acromio caraoidal osteo ligamentary vault can cause, during the arms elevation – when the humerus is carried this time in internal rotation (as with dumbbell lateral raise), excessive rubbing which may damage the infraspinatus tendon.

P.S. Do you want a free training program ? Click here

This site uses Akismet to reduce spam. Learn how your comment data is processed.

We use cookies on our website to give you the most relevant experience by remembering your preferences and repeat visits. By clicking “Accept All”, you consent to the use of ALL the cookies. However, you may visit "Cookie Settings" to provide a controlled consent.
Cookie SettingsAccept All
Manage consent

This website uses cookies to improve your experience while you navigate through the website. Out of these, the cookies that are categorized as necessary are stored on your browser as they are essential for the working of basic functionalities of the website. We also use third-party cookies that help us analyze and understand how you use this website. These cookies will be stored in your browser only with your consent. You also have the option to opt-out of these cookies. But opting out of some of these cookies may affect your browsing experience.
Necessary Always Enabled
Necessary cookies are absolutely essential for the website to function properly. These cookies ensure basic functionalities and security features of the website, anonymously.
Functional
Functional cookies help to perform certain functionalities like sharing the content of the website on social media platforms, collect feedbacks, and other third-party features.
Performance
Performance cookies are used to understand and analyze the key performance indexes of the website which helps in delivering a better user experience for the visitors.
Analytics
Analytical cookies are used to understand how visitors interact with the website. These cookies help provide information on metrics the number of visitors, bounce rate, traffic source, etc.
Advertisement
Advertisement cookies are used to provide visitors with relevant ads and marketing campaigns. These cookies track visitors across websites and collect information to provide customized ads.
Others
Other uncategorized cookies are those that are being analyzed and have not been classified into a category as yet.
SAVE & ACCEPT